The Book Thief, by Markus Zusak 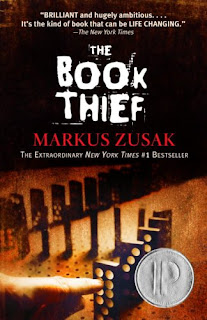 The story, of Liesel, a young German girl during world war II, is told by Death. And Death has an odd way of speaking. It’s a combination of sly, often grim, humor in the storytelling, and interjections of bold-face explanations, sometimes translations of words, sometimes descriptions of a character’s thinking process. For example,

Often the inserts are simply definitions. Emphasizing them in this way draws attention:

The language is often in the passive voice, as

When the coughing stopped, there was nothing but the nothingness of life moving on with a shuffle, or a near-silent twitch. A suddenness found its way onto his lips then,which were a corroded brown color and peeling, like old paint. In desperate need of redoing.

The story is also told, in part, with staccato, telegraph-like bursts. As:

“Mixed candy again?” She schmunzeled, to which they nodded. The money splashed the counter and Frau Diller’s smile fell slightly ajar.

The framed Fuhrer looked proud of them.

Triumph before the storm.

“Figurative language,” they call it. Initially I found the style so irritating that I wasn’t sure I’d get through it. It felt like I was being bludgeoned with fact after fact, metaphor after metaphor. But I thought there may be gold here somewhere so I kept on and found that I was better able to ignore the style as I moved through it.

I also notice that the book is categorized as “young adult”, which initially surprised me, but which may help explain why I found its constant obvious explanations annoying. Perhaps they are not so annoying to younger adults? Or people who think like younger adults?

The story of Liesel, a nine-year-old girl when she is thrown into a foster home, is a story of words. From her first book theft to her efforts to read to story-reading in an air raid shelter to the spreading of words in her own hand, she is acutely aware of the power of words. More than once the story slips into a comparison of her use of words with that of Hitler, who used them as weapons to kill. Her theft of the written word is a metaphor, as I see it, for her theft of power from the more common story told among Germans to themselves.

To me, the value in this story is the insight it offers into a poor German neighborhood during World War II. While non-Jewish Germans obviously did not suffer the same way Jews did, the truly poor were usually the first to be forced into service and to accept sacrifices not required of wealthier Germans. They were also the least powerful, essentially unable to effect any change in the political climate. The story brings home that simplistic notions of what went on in Germany during that war need to be revised.
Posted by Judith Lautner at 7:13 AM No comments:

The Cloud of Unknowing, by Thomas H. Cook

The Cloud of Unknowing was a book written in the 14th century, a "spiritual guide". It urges a young monk not to search for knowledge about God but to know God through love (I simplify, of course). There is nothing in this book, the one by Thomas Cook, that makes direct reference to the earlier work, except the way of knowing, of getting through that cloud, getting there through love.

We begin in the office of Detective Petrie. We begin with confusion: one death, two, three, four? And a promise to tell the whole story. This chapter is written in the second person, as if an unseen person is telling your story for you. The "you" in this case is David Sears.

The office conversation - or interrogation if you want to call it that - is intertwined with the story told in the first person by David Sears. The short detective chapters simply keep us in place, bring us back to the present.

Through this means Cook leads us gradually into the family of David, his sister Diana, and their father. He takes us through the drowning death of Diana's son Nathan, a child who was full of fear and who seemed to have inherited some kind of mental illness. The path then leads back to David's father, whose own struggle with what was diagnosed as "paranoid schizophrenia" escalated in later years.

I use the quotation marks only because my own knowledge of this condition tells me that there are no physical tests for it and there is, further, no proof of genetic descendency, however long such assumptions persist. Nevertheless, we have to assume in this book that, genetic or not, this family is somehow afflicted. That affliction may come as much from the cruel emotional cuts inflicted by David's father as by any kind of real illness.

We learn that Diana is not "getting over" her son's death. More, we learn that she is suspicious of the means of his death, yet her avenues of investigation defy normal categories. Instead of looking for physical or even circumstantial evidence, she looks backward thousands of years to ancient deaths, ancient myths, as well as more current stories. She tries to draw in her brother, his daughter, others.

Yet oddly nothing is every really overt. Nowhere do we have the direct conversation where people learn from each other. More, we see accusations and assumptions and an unwillingness to move in different directions. And thus I found myself at times frustrated, wondering why David does not consider other options, why Diana is not more specific. Yet isn't it often true that family members do not hear each other?

In the end we do have deaths, each one questionable - what made it happen? We don't have all the answers. We do have siblings torn by deaths but with a true loyalty to each other that survives the worst kinds of visions. Certainly this is less about the underlying mystery than it is about David and Diana and the bonds of childhood.

Posted by Judith Lautner at 1:37 PM No comments:

First, what this book is not:

* A romantic novel. The cover and name might suggest that it is one of those dark romantic novels involving a maiden subject to the whims of her master. Not so. Even though there is a young woman locked up.

* A journey into an England that never was. Mr. Taylor takes great pains to create an England that really was, in fact, although the main characters did not exist. He relies on a great deal of research and even includes excerpts from actual journals from the time.

And what it is:

It's fundamentally the story of a woman who, after losing a baby in childbirth, appears to become depressed and unhinged. After her husband's sudden death she is moved to the house of a friend of her husband's where she is, in fact, "kept". Her removal is for some reason not advertised so family members and friends do not know where she is. A few of them choose to find out and to find out why it is a secret.

This story, though, is blended with the stories of others, intertwined and woven with these others. We get to meet each character in turn and to watch how he or she progresses and eventually how each is connected to the widow Isabel Ireland. Most particularly we are presented with the unsavory character of Mr. Pardew. We occasionally see the world from his point of view; more often we see him go about his business as he might have been seen by some fictitious observer ("An onlooker...would perhaps have noted..."), a literary device frequently used in Victorian writing.

The novel is, in fact, written in much the style of England in the 1800s, but references and comparisons often have an ironic or humorous bent that likely would not have been seen in such literary works.

Mr. Pardew becomes a major character by way of his indulgences in various nefarious schemes that bring him money and others grief. He even goes so far as to develop a plan to rob a great deal of money from a train - a robbery that did, in fact, take place and with similar details (The Great Train Robbery of 1855).

Richly peopled with interesting characters, this novel is one to be savored, one that can be enjoyed bit by bit over several days. Better this way, I think, than read quickly in one long sitting.

Posted by Judith Lautner at 8:48 AM No comments:

Get me in your mailbox!