The Abstinence Teacher, by Tom Perrotta

Something of an old story in new drag. Ruth teaches sex education in a school district that has recently seen the growth of a couple of fundamentalist Christian churches. The school board, influenced by these new neighbors, votes to require the teaching of abstinence-only sex education, which Ruth abhors but nevertheless chooses to do, in hopes that some enlightenment will eventually make it to the board, where it can change the course.

Ruth is divorced and has a young daughter who plays soccer very well. She has made it to the A-team, where she is coached by a volunteer named Tim. Tim has taken on coaching as a way to connect to his own daughter from his former marriage, and has found he has a knack for it. He also has a knack for making bad decisions with the best of intentions. He recently joined a fundamentalist church because its pastor had helped him fight his addictions and he wants to stay clean and go straight. He continues to make questionable decisions but fights his own tendencies, sometimes with the pastor's help.

Tim and Ruth knock heads over an incident after a game that Ruth watched. After his team makes an amazing win, Tim spontaneously makes a circle with his team and says a prayer of thanks with them. Ruth sees this and confronts Tim. In spite of their differences, there is an attraction between them that neither acknowledges at the time.

There are glimpses into the world of the fundamentalist church that ring true. I sensed that Perrotta tried to be careful, to represent the members as flesh-and-blood, whole human beings. I didn't sense any exaggeration even though at times the situations were darkly funny. There are also glimpses into Ruth's world, a world where she lives alone and often enjoys the company of a gay couple, her best friends.

Although she is a grown-up woman with confidence in her work, Ruth hungers for more. Specifically, she's lonely. Specifically, she craves a man in her bed. This is a common theme in chick-lit and I had hoped not to find it here, and it colored my reaction to this story. Throughout the book I kept looking for the real theme, and in the end it was simply an updated romance, where gay guys are okay and people are not perfect, Christian or not. The characters are certainly more interesting than those in the pulpier novels but I felt the story lacked real direction beyond the romance.
Posted by Judith Lautner at 9:43 AM No comments:

Cheating at Canasta, by William Trevor

A collection of short stories revealing both the dark and the brilliant sides of different lives. The subjects range from death - unintended murder, death by illness, death of a dog - to love - lost, regained, lost again - to just somehow living. The stories all reveal the innermost feelings of a mind, the regrets, the nagging doubts, the guilt, and more than once I asked myself "would I have acted in the same way?" I worried that I might.

Thus they are searching stories. They dig in and don't make it easy for us. Yet they are compelling and eternally human.
Posted by Judith Lautner at 10:43 AM No comments:

My Sister's Keeper, by Jodi Picoult

The theme is an interesting and important one. Kate, a very young child, suffers from a rare, aggressive cancer. Her best hope is to get cord blood and possibly a bone marrow transplant from a matched donor. Her parents go through in-vitro fertilization with a fertilized egg that matches the sick child's in the important aspects. Anna is born to save Kate.

Anna's body is used several times over the years, requiring Anna to enter the hospital for minor to more major operations. When she is thirteen and asked to offer a kidney to her sister, Anna rebels. Her form of rebellion involves engaging a lawyer to obtain "medical emancipation" so she can make her own decisions about how her body is used.

The chief issue is one of consent. Through the years Anna's parents, and particularly her mother, have simply assumed Anna is willing to offer what she can to save her sister's life. Understandably, Anna has come to think of herself in some respects as invisible.

Anna is a strong character but she doesn't always express herself well. Through much of the book others speak for her, spelling out her need for the freedom to choose. It grated on me that she did not make these arguments particularly well, or at all, herself.

Anna's lawyer is an interesting character as well. He has a service dog with him but is always giving clearly false reasons for the dog: I'm color-blind so he lets me know when the light is green. I'm deaf in one ear so he alerts me when I need to hear something on that side. Some of the reasons are funny, others lame. I had difficulty understanding why he took Anna's case, however, with such flimsy reasoning from Anna herself. Further, as the case proceeds, Anna waffles back and forth yet he does not throw up his hands and say never mind. I can't grasp why he is so interested in the case or why he stays with it when his client does not really seem clear on her own motives.

The court hearing on Anna's medical emancipation didn't read quite feel real to me. The court procedures seemed pretty casual and the lawyers did not prepare their witnesses. It seemed more than strange to me that they did not go over testimony ahead of time but just assumed.

Although I found the story interesting and at times informative I also felt at times that circumstances and conversations were bordering on trite and predictable. These moments did not take it into the land of chick lit or worse, however. They merely assured me that it's a good but not a great book.
Posted by Judith Lautner at 11:28 AM No comments:

The Gathering, by Anne Enright

One reviewer called this book "stunning". While such adjectives are overused this one certainly applies in this case. This unassuming book packs a surprising punch.

Veronica is one of several children, somewhere in the middle of the group, who grow up, with a mother who is almost invisible and a father who dispassionately hits when people are in his way, near Dublin. The story centers around the suicide death of her brother Liam when Veronica is 39 years old. Veronica tells the story in the first person, dipping into and out of memory, slipping backward and forward in time. Her memories, though, are not exact. She has to guess most of the time and in some cases she embroiders deliberately, creating images she would like to have happened but knows probably did not. It is this aspect of the story that rang especially true for me, given that I am not at all sure of my own memories and I have an idea how memory works.

Eventually, as Veronica explores her own thoughts and memories a picture comes to her, a real memory. Although the place may not be correct she knows the incident is, and it is only as an older adult that she recognizes what the incident really meant for her brother and her family. The memory shocks her and she continues to search her memories and even to search her mother's house for some verification of what she actually knows.

The death of Liam has a profound effect on Veronica and her family. Her conversations rarely make sense to others. She dwells on the peculiarities of her dysfunctional family. Her mind and her actions wander incessantly. Yet somehow, every strange twist and turn leads to an inevitable finish.

Although the format of the book seems, on the surface, almost chaotic, it makes sense while in it. It is complex yet consistent and utterly real.
Posted by Judith Lautner at 7:25 PM No comments:

Email ThisBlogThis!Share to TwitterShare to FacebookShare to Pinterest
Labels: Enright, literature, The Gathering

On the Road, by Jack Kerouac 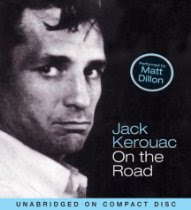 I was in elementary school when this classic was published, several years after Kerouac finished the first draft. That first draft was one long scroll (120 feet long, all one paragraph, all taped together so Kerouac could type without stopping to change paper), which has only recently been printed in its entirety. The version that Kerouac saw in print, though, is what Matt Dillon reads on this CD edition. I had not read it before and I was pleased to find it in time to listen to it on a short road trip of my own.

This official version was edited to remove the more sexually explicit passages, but it still reveals Kerouac's comfort with minorities and subcultures, an unusual position at the time.

On the Road conjures up visions of a free and easy lifestyle, rich in drugs, women, song, and adventure. Many others have gone on the road since Kerouac and his friend Neal Cassady, perhaps inspired by his tale. If so, I am not entirely sure why.

Yes, the road trips - there are several of them in this tale - do involve drugs, women, song, adventure. Certainly Kerouac appears to enjoy many of these adventures. But that enjoyment at times seems forced, as if he feels he should paint it all with a broad brush of crazy good times. Leaking through and finding a stronger voice as the trips go on is Jack's real goal: to find a woman to love, to marry, to settle down, to be a responsible adult. What also comes through in spite of some fairly wild exploits is his fundamental humanity, his compassion for others. I couldn't help liking him, in contrast to some of his friends.

It's easy to see how this lengthy confessional journey led to "gonzo journalism", a more personal point of view, and to today's public blogs.

Matt Dillon recorded the tale in a voice that seems to be not impressed with itself. It's almost flat, uninterested, trying to get the story out there and letting it fall where it may. By contrast, whenever Dillon speaks as Cassady ("Dean Moriarty" in this edition) he affects a voice that has years of drinking and playing around in it. While the voice is at times hilarious, I found it difficult to connect that raw voice to a very young man. It seemed at least forty years old to me. At times I wanted more from the Kerouac voice and perhaps a bit less from Cassady's.
Posted by Judith Lautner at 10:26 AM No comments:

Get me in your mailbox!